The Sword and the Loves is a story game for 3-5 players to tell stories inspired by Arthurian legends.

Each player controls a major character in a storyline filled with virtues, beliefs, love, and desire. Players take turns driving a part of their character’s story towards a point of destiny, while other players interact with and influence that story.

The Sword and the Loves has two famous parents: the chivalric romances written by Chrétien de Troyes and Archipelago III by Matthijs Holter.

The general mood owes much to the works of the French poet, while the rules belong to Matthijs’ game, though there are with some changes to make the game closer to the characteristics of chivalric literature. Furthermore, some rules would not have existed without Love in the Time of Seið by Matthijs Holter and Jason Morningstar.

This product contains also the Italian edition of the game.

In order to download this game you must purchase it at or above the minimum price of $5 USD. You will get access to the following files:

The Sword And The Loves is a 48 page black-and-white medieval/Arthurian roleplaying game. And it is *very* grounded in that courtly romance / chivalric tales feeling. It specifically rejects being identified as fantasy.

It does do this all through a fairly scholarly tone, which runs through the game, but I'm happy that it chose to be direct about this. As a game, it really wants you to treat its elements as fresh (the way a medieval audience might have) rather than simply tropey (the way a modern audience is tempted to,) and it works a lot better when you do that.

Gameplay-wise, Sword is primarily a storytelling game. It has a rotating player, a rotating GM, and a rotating supporting cast---so you'll each take turns playing extras in each other's stories in a fashion that I'm tempted to call "Canterbury style."

Interestingly, Sword gives a lot of power to the player to invoke the GM. You can call "Harder!" if you think the GM isn't hitting you hard enough with an obstacle or a situation, or you can call "Describe That In Detail" to force the GM to give more information, and there's enough of these power-words to cover all major situations without being excessive.

In some ways, Sword feels like a convergently evolved Belonging Outside Belonging. Instead of forsaking the GM role, it hands off parts of the role to everyone else, and then it tightens up the game elements that the GM is responsible for. This gives gameplay a very strong flow, and it makes managing the spotlight not just easy but effortless.

Overall, if you like the specific cultural feeling of the middle ages in western Europe, or if you like your Arthurian mythos without adding modern fantasy flourishes, or if you write narrative games and want to see a phenomenal approach to the genre, I sincerely recommend Sword And The Loves.

-It might be worth houseruling that anyone can pick up or put down an Element, rather than assigning them permanently at the start. This allows people to jump in with good ideas, and lets them bow out when they're not sure they have something in mind for their element in the current circumstances. 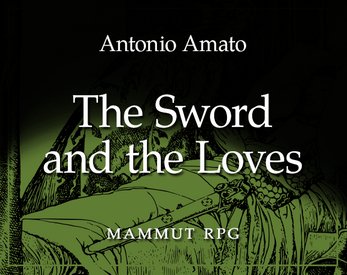